The Pan African Film & Arts Festival exists to evolve the emerging Black storyteller.
We showcase the broad spectrum of creative works and films
by visionaries who highlight the diverse stories of Black America, Africa and the global Black Diaspora. 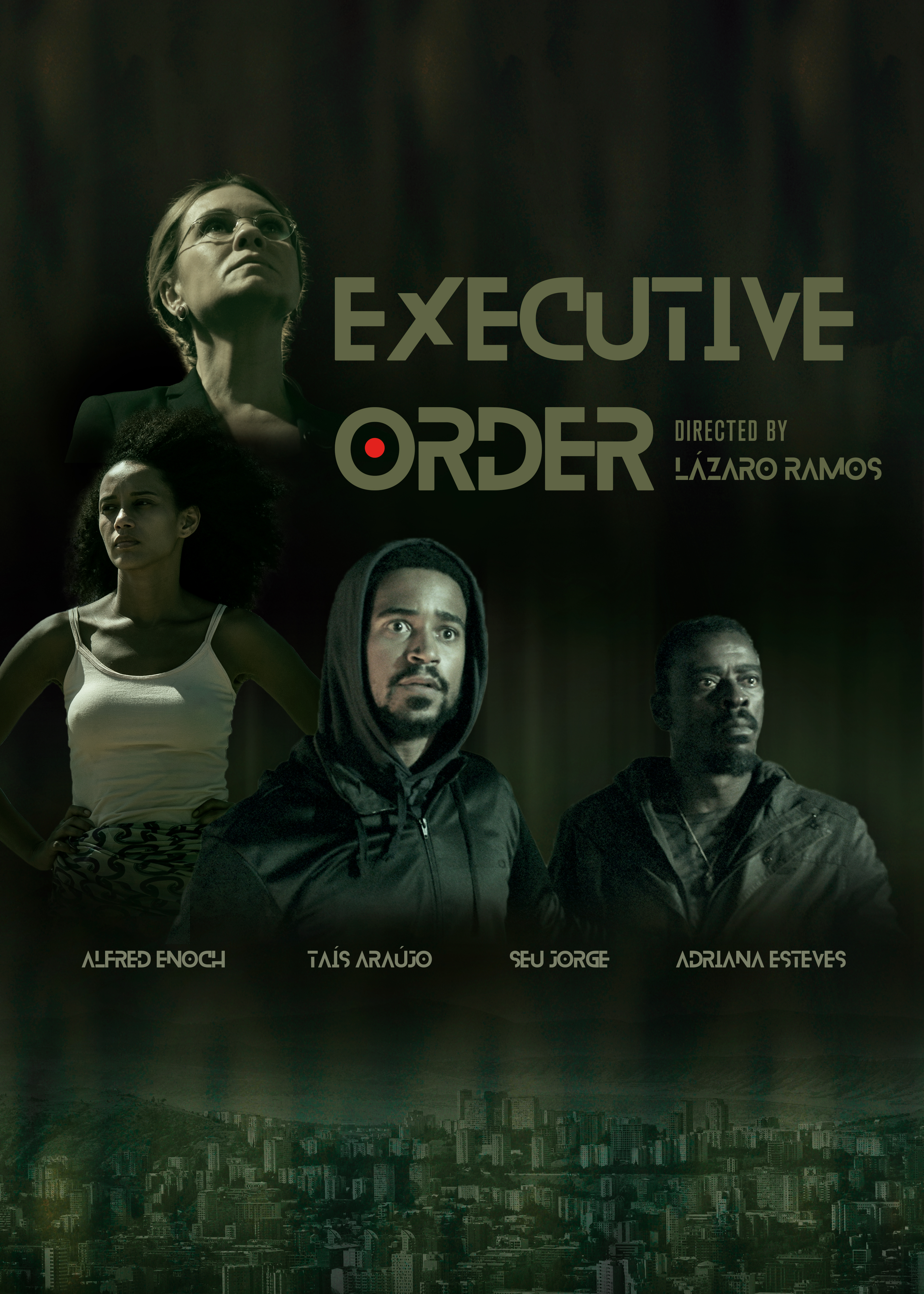 Set in a dystopian near future in Rio de Janeiro, a lawyer sues the Brazilian government for reparation of all descendants of African slaves in the country. The authoritarian government responds by signing an executive order sending all Black citizens to Africa as an excuse to repay the debts of slavery. Citizens are measured by their skin color, hunted and exiled to Africa against their will. While the army and police enforce the law, he enlists his uncle to find his wife, a doctor who has gone...
Starring Alfred Enoch, Taís Araújo, Seu Jorge, Adirana Esteves, Renata Sorrah

*The film will only be available at its scheduled start time, which is at 6:00 pm PST. Anytime before 6:00 pm PST, the viewing will not be available. 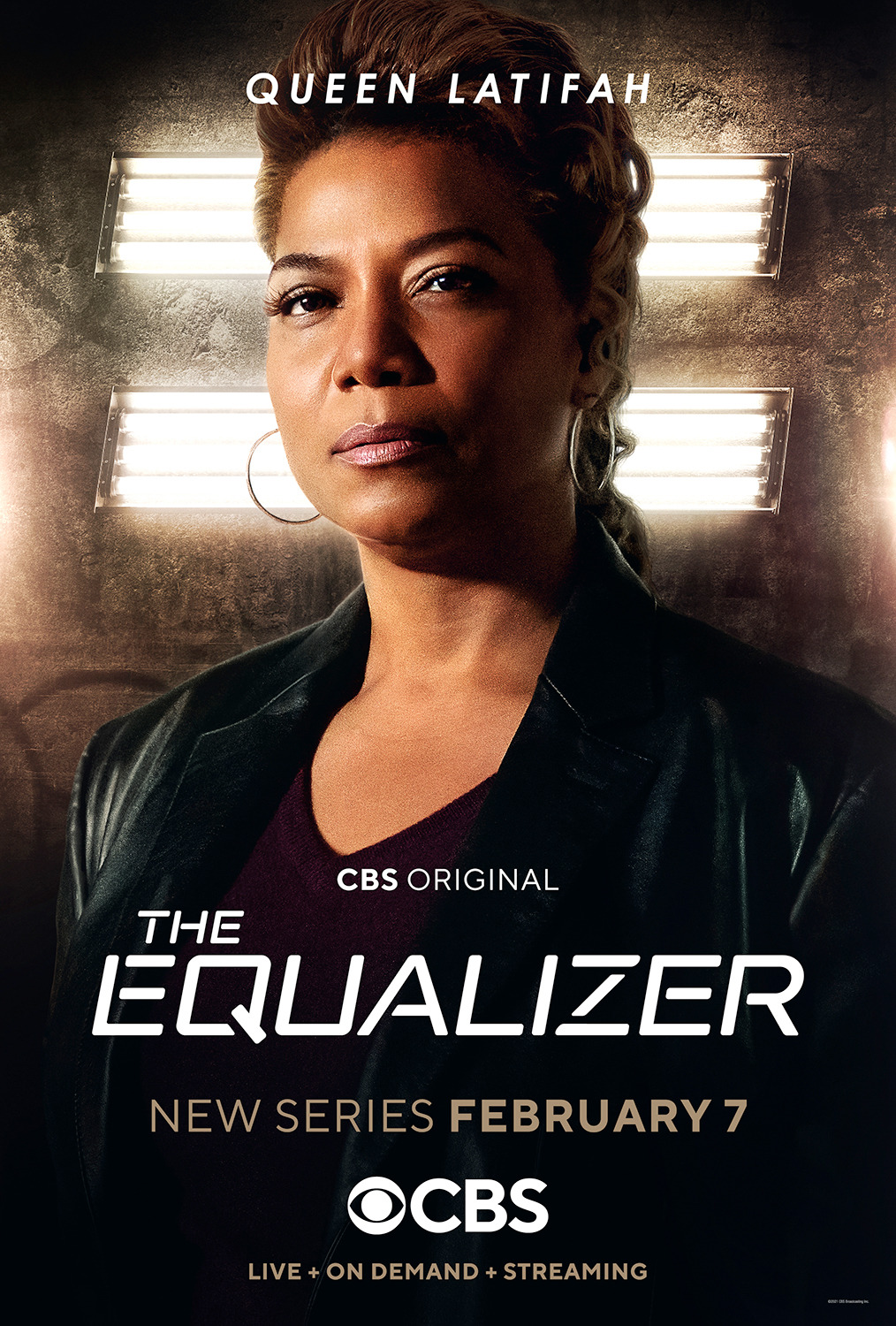 An enigmatic figure who uses her extensive skills to help those with nowhere else to turn. McCall investigates a community activist's staged suicide and uncovers a connection between his murder and his protests over local real estate development. Cast: Queen Latifah, Tory Kittles, Adam Goldberg 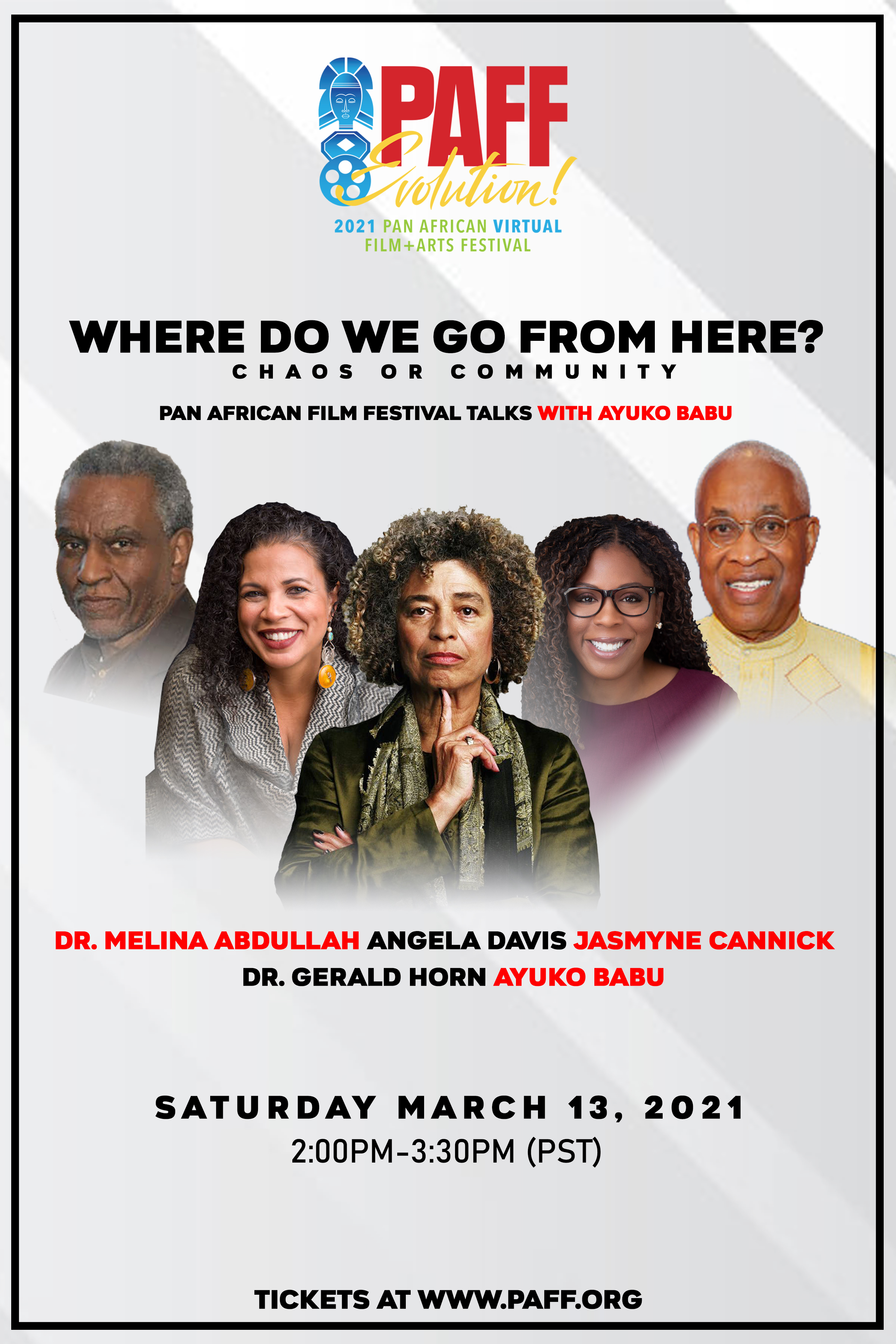 Where Do We Go from Here: Chaos or Community? 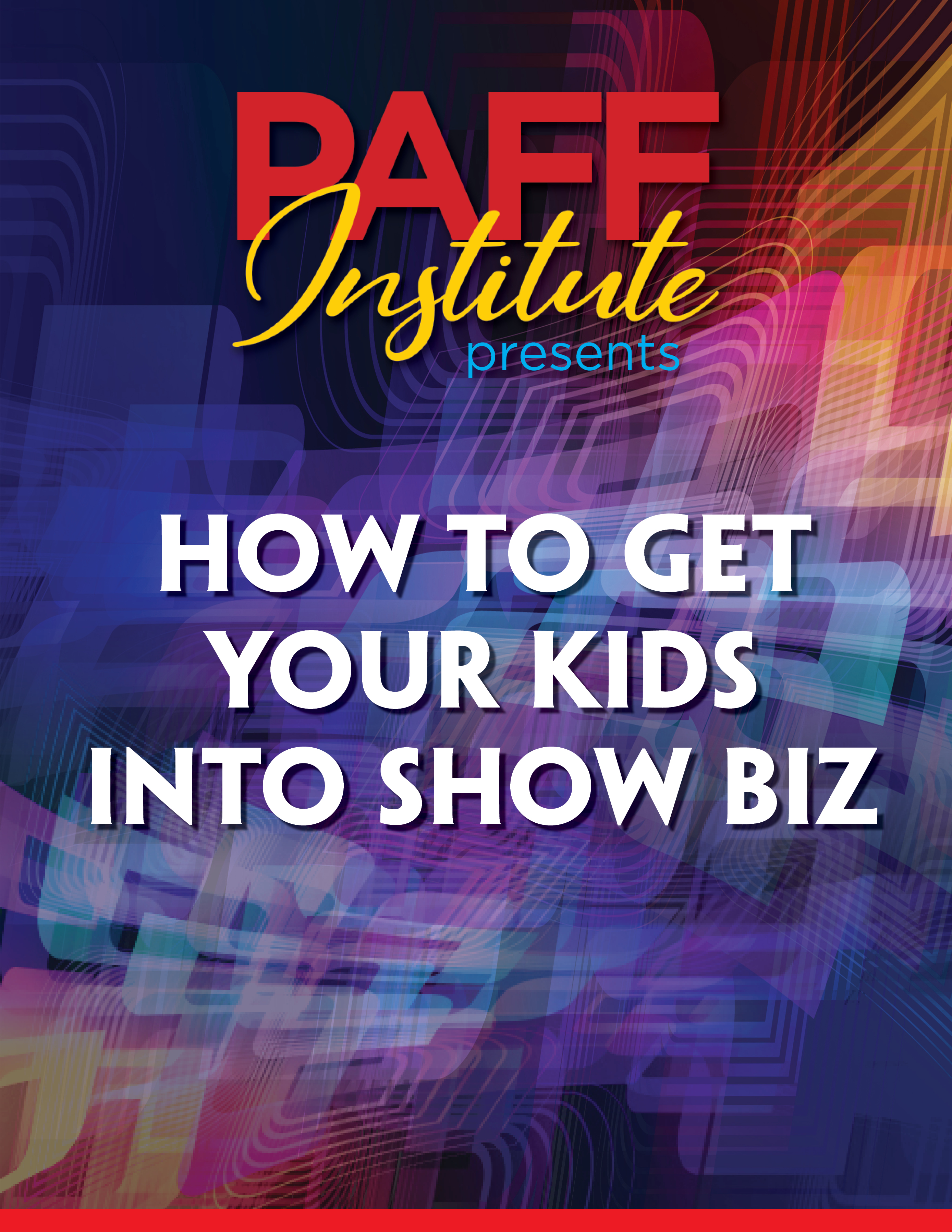 How To Get Your Kids Into Show Biz

This panel is designed to equip parents of young Black & Brown talent just starting out with the tools and information pivotal to their success as they try to navigate the entertainment industry. Learn best practices, tips, tools, resources as well as pitfalls to avoid. Panelists include a Talent Agent, Acting Coach, successful Mom-ager & Son, and a Casting Director. 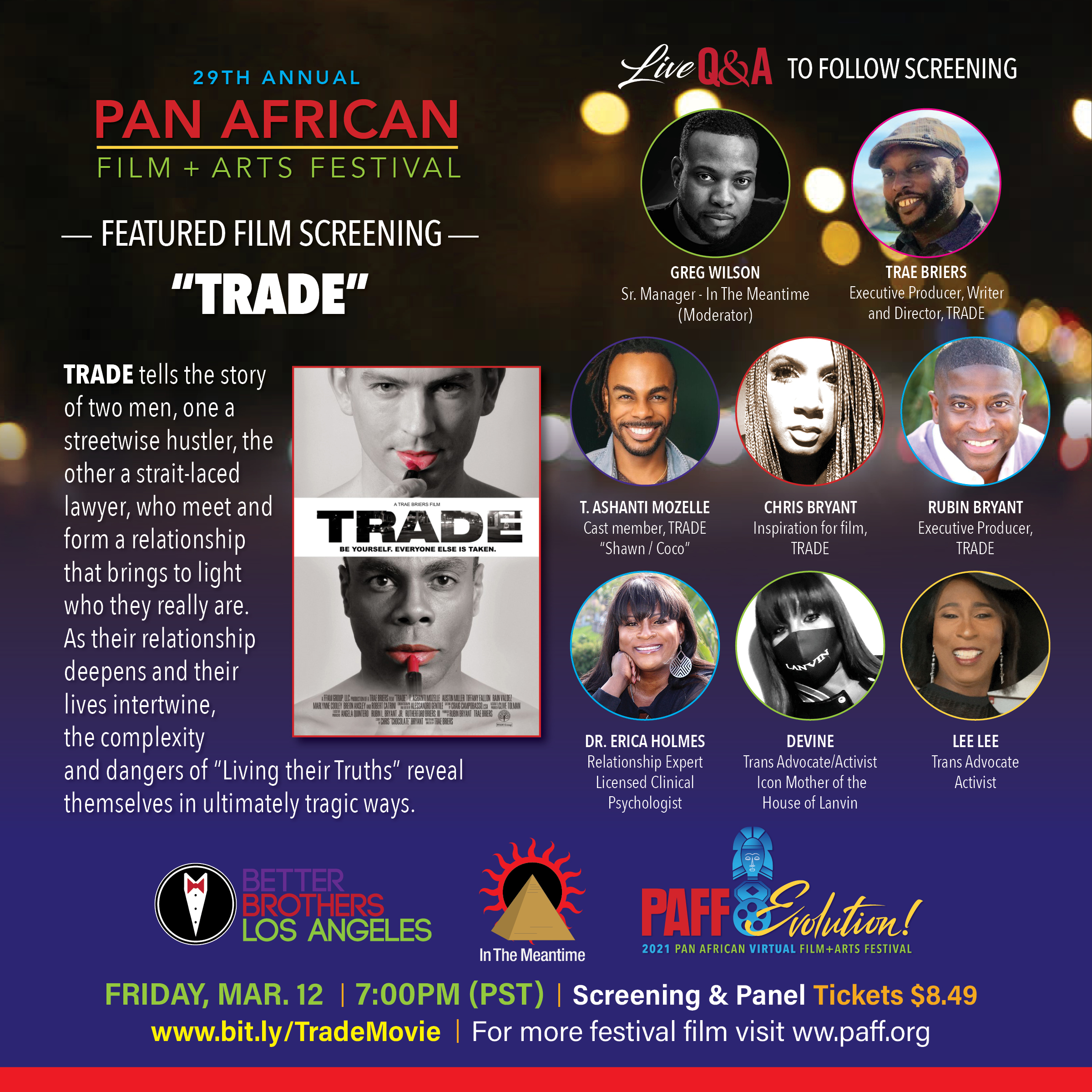 TRADE tells the story of two men, one a streetwise hustler, the other a strait-laced lawyer, who meet and form a relationship that brings to light who they really are. As their relationship deepens and their lives intertwine, the complexity and dangers of “Living their Truths” reveal themselves in ultimately tragic ways. Following the Pan African Film Festival’s feature screening of the film”TRADE”, a special guest panel will discuss the movie and share their personal insights and challenges facing the transgender community. The group will engage in an authentic conversation about the lives of transgender people, and provide tools on how to support and advocate for the LGBTQ+ community. 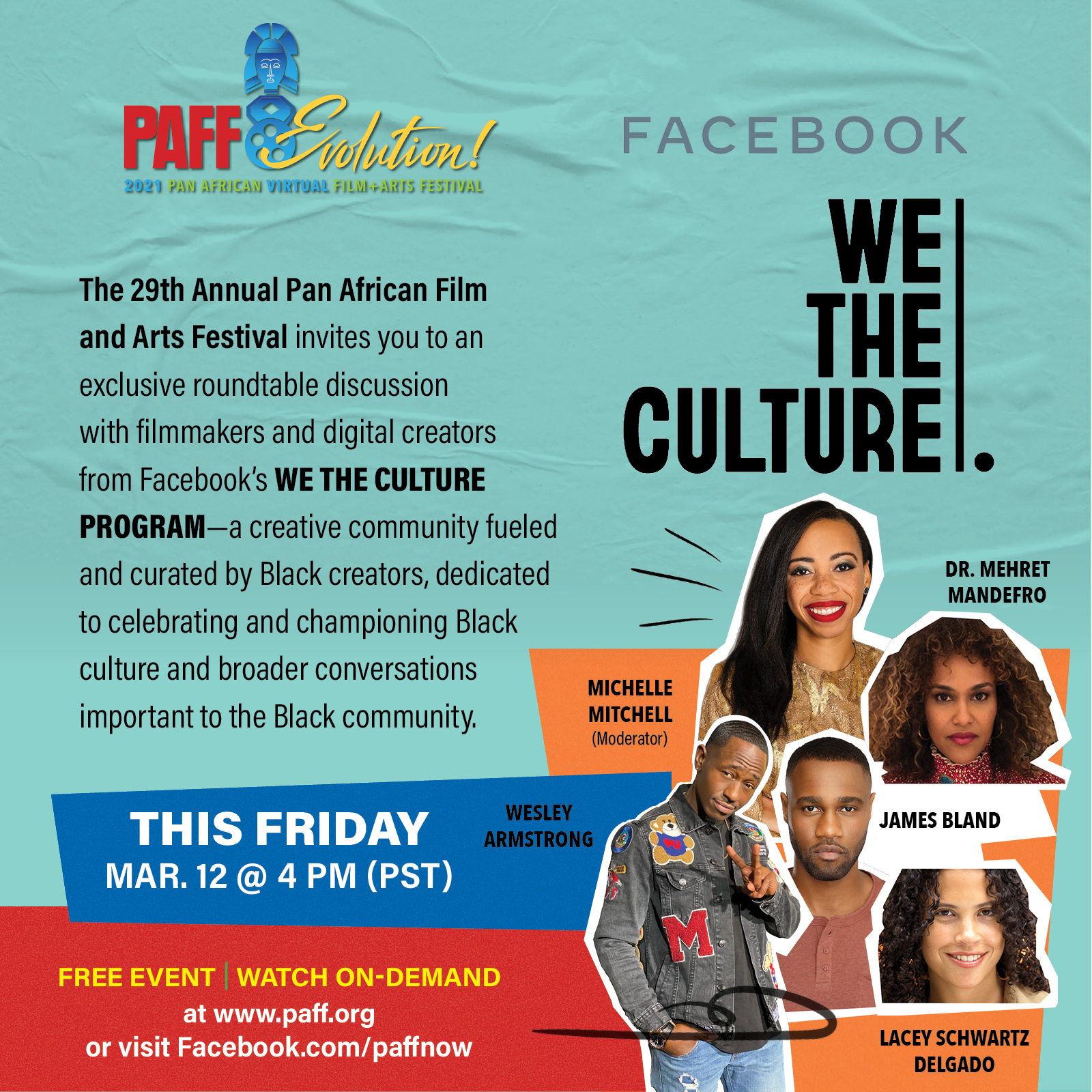 Join Moderator Michelle Mitchell, and panelist, Dr. Mehret Mandefro, Lacey Schwartz Delgado, Wesley Armstrong, and James Bland. Created by a passionate team of Black employees at Facebook, We The Culture is elevating Black creators to share their vision with the world, spark community and empower them to build successful, entertaining and sustainable networks across Facebook and Instagram. On Demand below or facebook.com/paffnow Inside THE CHI Writers' Room 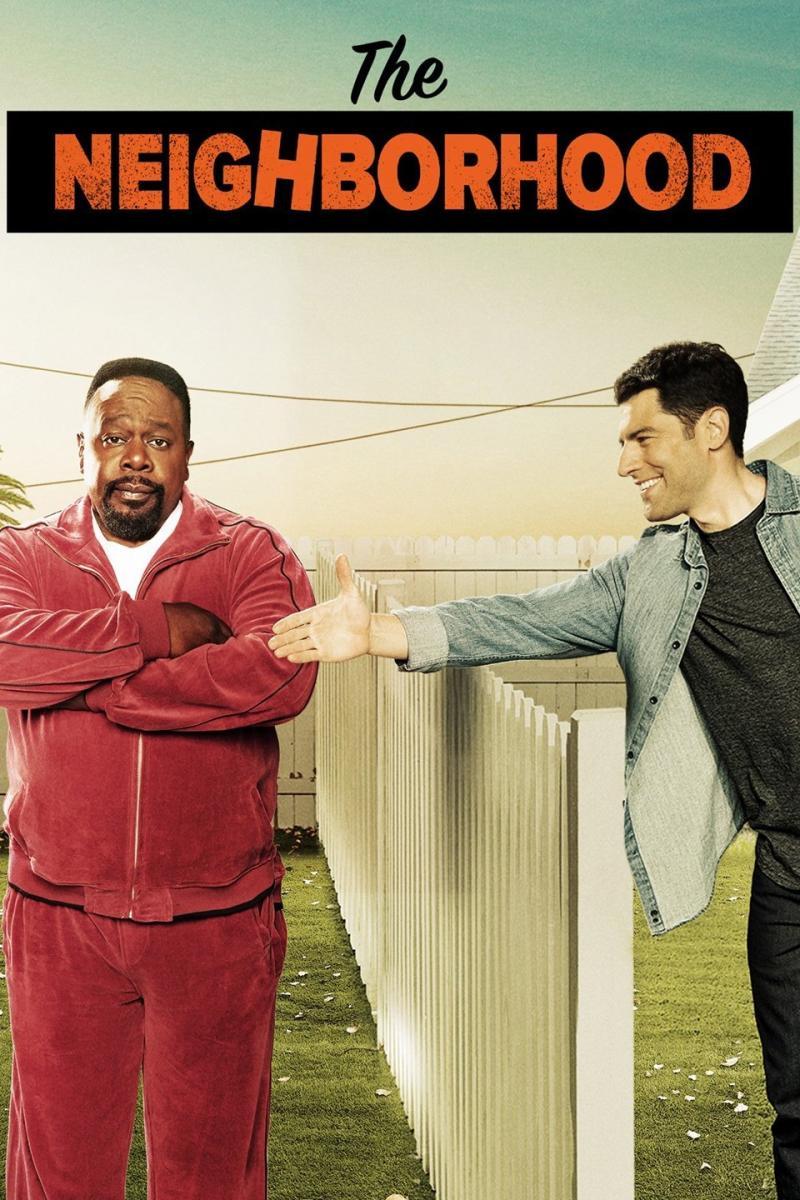 A comedy about what happens when the friendliest guy in the Midwest moves his family to a neighborhood in Los Angeles where not everyone looks like him or appreciates his extreme neighborliness. Cast: Cedric The Entertainer, Max Greenfield, Tichina Arnold, Sheaun McKinney, Marcel Spears, Beth Behrs 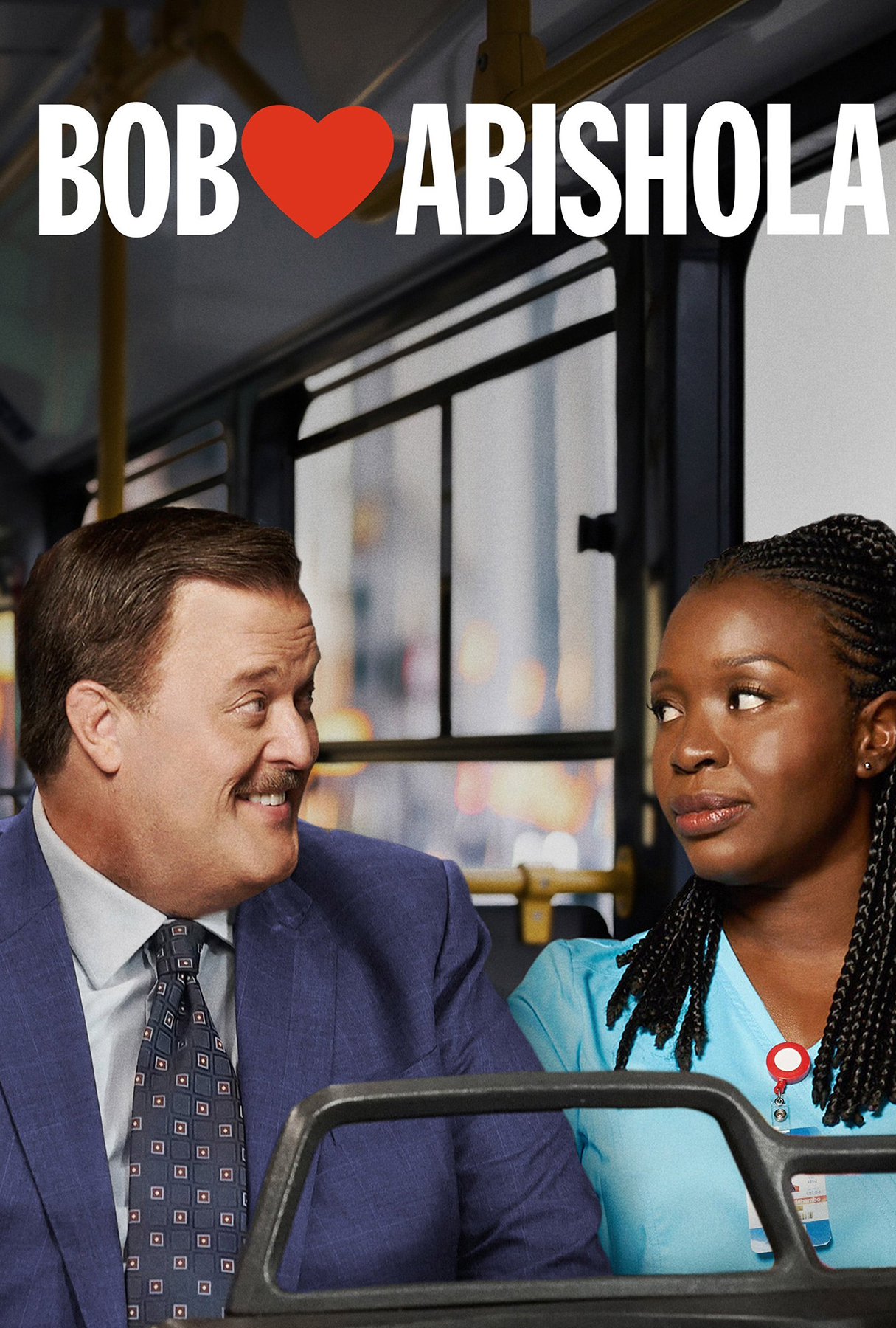 Bob, a middle-aged compression sock businessman from Detroit, unexpectedly falls for his cardiac nurse while recovering from a heart attack and sets his sights on winning her over. 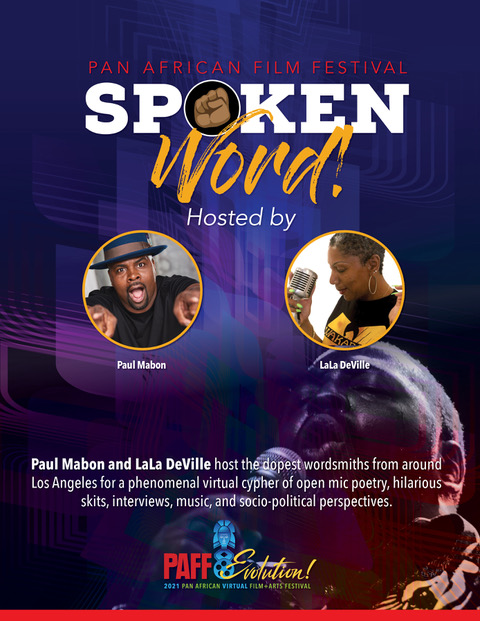 Produced and Hosted by Paul Mabon

This year we have phenomenal features, hilarious skits, interviews, historical perspective and the fashion of some of LA’s most talented poets! Featured poets are young, black and tenured professor Bridgette Bianca from South Central Los Angeles and from 'Da Poetry Lounge,' 7x HBO Def Poet, the one and only Shihan! A Crime on the Bayou

After the Lockdown: Episode 6/Black Hollywood

Back of the Moon

City On the Hill

Dawn in the Dark

Eavesdropping on the Elders

Echoes of a Winter Sunshine

Firestarter - The Story of Bangarra

It Can Be Done: Ending Homelessness in America

It Can Happen To You

Judas and the Black Messiah

Kiss From A Rose

May Twenty Seventh of This Year

Maya and Her Lover

Memoirs of a Black Girl

Moon in the Daytime

My Father The Mover

One Life To Blossom

Our Gorongosa - A Park for the People

Ovals: I Don't Want to Love Myself

Running For My Life

Son of Oakland: A Tribute to Victor McElhaney

Sundays at The Triple Nickel

The Deadliest Disease In America

The Deliberate Death of My Father

The First Time After

The Ghost And The House Of Truth

The Girl Who Dreamt Instead

The Girl with Curly Hair

The House on Carter Road

The Hyers' Sisters Dream and Legacy

The King and the Pawn

The McHenry Trial - Don't Judge a Kid by Their...

The Mercy of the Jungle

The Moon and Me

The Patterson: Another Bronx Tale

The Power of Hope

The Sound of Silence

This is Not a Burial, It's a Resurrection

Till Death Do Us Part

Truth to Power: Barbara Lee Speaks for Me

Uprooted - The Journey of Jazz Dance

We are at War (Nous Sommes en Guerre)

When The Sun Sets (Lakutshon' Ilanga)

When the Waters Get Deep

Who is Gatsby Randolph

Who is Sheila S?

This festival is made possible by our partners and sponsors.

The Pan African Film & Arts Festival is supported, in part, by a grant provided by:

The Academy of Motion Pictures Arts and Sciences

PAFF is a 501 (c) (3) Non-Profit dedicated to the promotion of ethnic/racial respect and tolerance through the exhibition of films, art, and creative expression. When people talk about PAFF, they talk about our partners too! Aligning with PAFF generates social content and news media that helps to boost both awareness and perception of your brand with a diverse, global audience hailing from the United States, Africa, the Caribbean, Europe, Canada, South America, the South Pacific, and increasingly Asia.