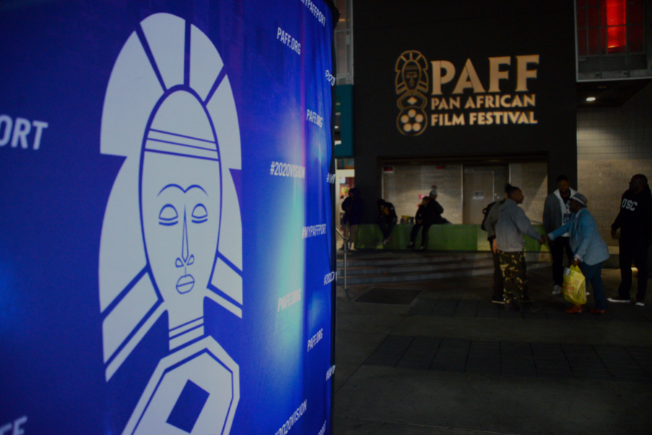 LOS ANGELES, California – Today, PAFF announced the full lineup for the 30th annual Pan African Film & Arts Film Festival, the largest Black film festival in America, taking place April 19 – May 1, 2022. This year the Festival will make its return to the Cinemark Baldwin Hills for in-person screenings, featuring over 200 films from 55 countries, in 18 languages, including 58 World and 32 North American premieres.  Of the films selected for the Festival, 46% are helmed by female, queer or non-binary filmmakers, and 80% are directed by filmmakers of African descent.  Many titles will also be available virtually for in-home screenings via the Festival’s streaming platform Eventive to audiences worldwide.  The Baldwin Hills Crenshaw Plaza will once again host its renowned Artfest, featuring over 100 established and emerging fine artists and quality craftspeople from all over the Black Diaspora.  Festival Passes and individual tickets are on sale now and can be purchased at www.paff.org.

The 30th Pan African Film & Arts Festival opens Apr. 19 at the Directors Guild of America with REMEMBER ME, a poignant look into the life and rise of gospel singer Mahalia Jackson and starring Grammy-winning singer Ledisi. The Centerpiece presentation are the winning films from the JOHN SINGLETON SHORT FILM COMPETITION.  Inspired by the legacy of the late Los Angeles-born legendary African American filmmaker, John Singleton, the competition is the result of a partnership between the City of Los Angeles and PAFF under L.A. City Council President Herb Wesson’s embRACE L.A. initiative and is designed to honor Singleton’s cinematic legacy while simultaneously celebrating his unapologetic approach to filmmaking. The Festival will also host the premiere of FX Network’s hotly anticipated “Snowfall” Season 5 finale and Showtime’s “The Man Who Fell From Earth,” starring Chiwetel Ejiofo. The full schedule is available in the online Festival Program.

7,200 miles away from Los Angeles in Ougadodo, Burkina Faso, the idea to showcase Black film and filmmakers in Los Angeles was born. It was 1989, the 20th anniversary of FESPACO also known as The Panafrican Film and Television Festival of Ouagadougou, the largest film festival in Africa. There, Ayuko Babu, Danny Glover (The Color Purple, Lethan Weapon), and others with the help of then-Chairman of the U.S. Subcommittee on Africa Rep. Mervyn Dymally and Burkina Faso President Blaise Compaoré conceived a plan to bring African cinema to the U.S. Thirty years later, the Pan African Film Festival (PAFF), is still going strong and is the largest Black film festival in America.

Ticketing
Festival Passes and individual tickets are on sale now and can be purchased at www.paff.org.

Established in 1992 by Hollywood veterans Danny Glover (The Color Purple, Lethal Weapon), the late Ja’Net DuBois (“Good Times”), and Ayuko Babu (Executive Director), the Pan African Film Festival is a 501(c)(3) non-profit organization that has remained dedicated to the promotion of Black stories and images through the exhibition of film, visual art, and other creative expression. PAFF is one of the largest and most prestigious Black film festivals in the U.S. and attracts local, national, and international audiences. In addition, it is an Oscar-qualifying festival for animation and live-action films, and one of the largest Black History Month events in America.