The Dream Whisperer Set to Premiere at PAFF 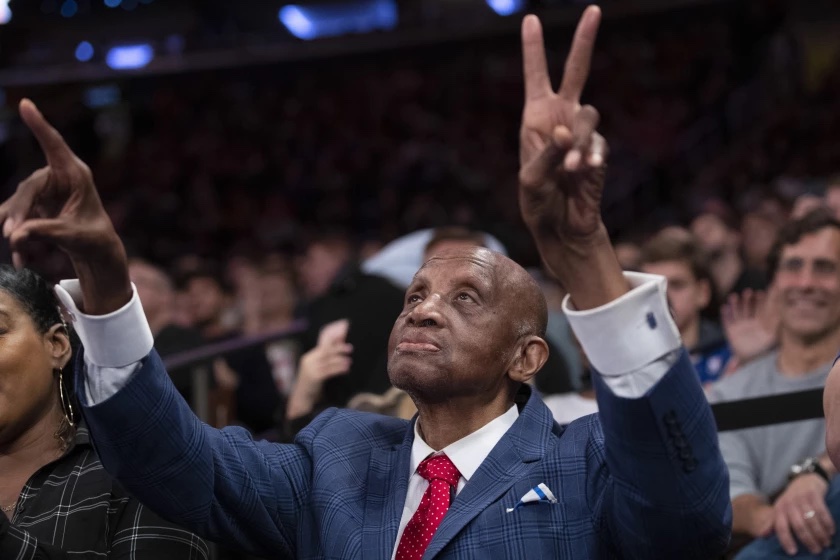 BASKETBALL LEGEND DICK BARNETT’S LONG, CHALLENGING, AND HISTORIC JOURNEY TO GET HIS COLLEGE TEAM INDUCTED INTO THE HALL OF FAME IS THE SUBJECT OF INSPIRING NEW DOCUMENTARY

Dick Barnett spent three seasons with the Lakers before helping the Knicks beat L.A. twice in the NBA finals

In 1957, nine years before Texas Western’s NCAA title victory over Kentucky, there was the Tennessee A&I (now known as Tennessee State University) Tigers.  And while Texas Western became the first team to win the NCAA title with an all Black starting lineup, Tennessee A&I was the first Historically Black Colleges and Universities (HBCU) to win a national championship tournament.  Led by Hall of Fame coach John McLendon, and future NBA players Dick Barnett and John Barnhill, Tennessee A&I closed out the 1950s winning the NAIA Tournament in 1957, 1958, and 1959, the first college team, on any level, to win three consecutive national titles.

Fittingly, in the 65th anniversary year of the Tigers’ first national championship of that historic run, comes the 2022 release of The Dream Whisperer (The Dream Whisperer Trailer – YouTube).  Eleven years in the making, the documentary chronicles New York Knicks legend Dick Barnett’s long and often frustrating journey to have his team recognized for its achievement at the highest level — induction into the Naismith Basketball Hall of Fame.  The Dream Whisperer, which will first be playing the festival circuit, is a not only a homage to a historic team from a small HBCU school which won three consecutive national championships in the midst of segregation in the Jim Crow South, but a testament to Barnett’s persistence and perseverance to make sure the Tigers’  legacy  would be honored and remembered.

“This is a story about the first college basketball team to win three consecutive national championships.  A team that almost was lost to history until I decided to do something about it,” said Barnett, who is now 85.  “It’s about a legacy that needs to be protected and passed on.”

Barnett, known as the Skull during his college days, was selected by the Syracuse Nationals in the first round (No. 5 overall) of the 1959 NBA Draft.  The Nationals made the playoffs in Barnett’s first two years before he jumped to the American Basketball League in 1961, where he led the Cleveland Pipers, owned by George Steinbrenner, to the ABL title.  Barnett and his Fall Back Baby jump shot returned to the NBA in 1962, playing for the Los Angeles Lakers, a team that made it to the NBA Championship Finals in two of the three years he played for them.

He was traded to the New York Knicks in 1965 and was a member of the 1970 and 1973 NBA Championship teams.  The Knicks retired his No.12 jersey, which hangs in honor with those of his teammates inside Madison Square Garden.  Barnett, who holds a master’s degree in public administration from New York University and a PhD in education administration and supervision from Fordham University, continues to champion the battles for equity and social justice by telling his story, and the story of the courageous and talented Tennessee A&I team, on which he played, to students, of all ages, around the country.

The Dream Whisperer will have its world premiere at the 30th Annual Pan African Film & Arts Festival on Sat., Apr. 30th at 7 p.m. with Dick Barnett in attendance.  Tickets are available here.

Established in 1992 by Hollywood veterans Danny Glover (The Color Purple, Lethal Weapon), the late Ja’Net DuBois (“Good Times”), and Ayuko Babu (Executive Director), the Pan African Film Festival is a 501(c)(3) non-profit organization that has remained dedicated to the promotion of Black stories and images through the exhibition of film, visual art, and other creative expressions. PAFF is one of the largest and most prestigious Black film festival in the U.S. and attracts local, national, and international audiences. In addition, it is an Oscar-qualifying festival for animation and live-action films, and one of the largest Black History Month events in America.